Signs a Person May Be Lying 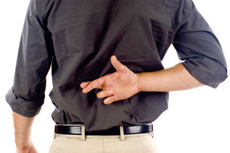 The capacity to lie is noted early and nearly universally in human development. Social psychology and developmental psychology are concerned with the theory of mind, which people employ to simulate another’s reaction to their story and determine if a lie will be believable. The most commonly cited milestone, what is known as Machiavellian intelligence, is at the age of about four and a half years, when children begin to be able to lie convincingly. Before this, they seem simply unable to comprehend why others don’t see the same view of events that they do — and seem to assume that there is only one point of view, which is their own. Young children learn from experience that stating an “untruth” can avoid punishment for misdeeds, before they develop the theory of mind necessary to understand why it works. In this stage of development, children will sometimes tell outrageous and unbelievable lies, because they lack the conceptual framework to judge whether a statement is believable, or even to understand the concept of believability. When children first learn how lying works, they lack the moral understanding of when to refrain from doing it. This takes years of watching people tell lies, and the results of these lies, to develop a proper understanding. Propensity to lie varies greatly between children, some doing so habitually and others being habitually honest. Habits in this regard are likely to change in early adulthood. Teenagers and adults lie for a variety of reasons. The most common reasons that an individual engages in lying are:

Following are just some of the possible indicators that a person may be lying: